Customer Spotlight: A Quest "In Our Element"

As a fan of pop-up tents on Hondas, I started following Fred on social media and one day, unknowingly, through a casual conversation, I was able to help him with his cursed axle problem and properly dial in his suspension for the Element. I finally met Fred in person and he helped us develop the Level 1 and Level 2 engine/subframe drop kit for the Element. Fred G is one of the most humble and authentic people that you'll ever meet. He is out to spread the love of the Element community and he won't hesitate to help you. As a Los Angeles local, we had to share the story behind his unique and meaningful build.

We took a trip out to LA to meet Fred at Dockweiler Beach, right by the famous LAX international airport.

JR: What made you decide to build your Element the way you did?

Fred: I was basically inspired by the VW Westfalia. Just the whole concept of the van and pop top on the open road. Even though he purchased the Element in 2010, Fred wanted a dedicated pop-top/road trip car.

Fred: We were actually going to buy a VW with a pop top, we actually found a local guy selling one. We planned to meet up with him one weekend and he never showed up. After this happened, I basically learned more about the Westfalia and the commitment of owning one. We realized we weren’t ready for whatever repairs and all these things that would come up, which often comes up from what other people have said. 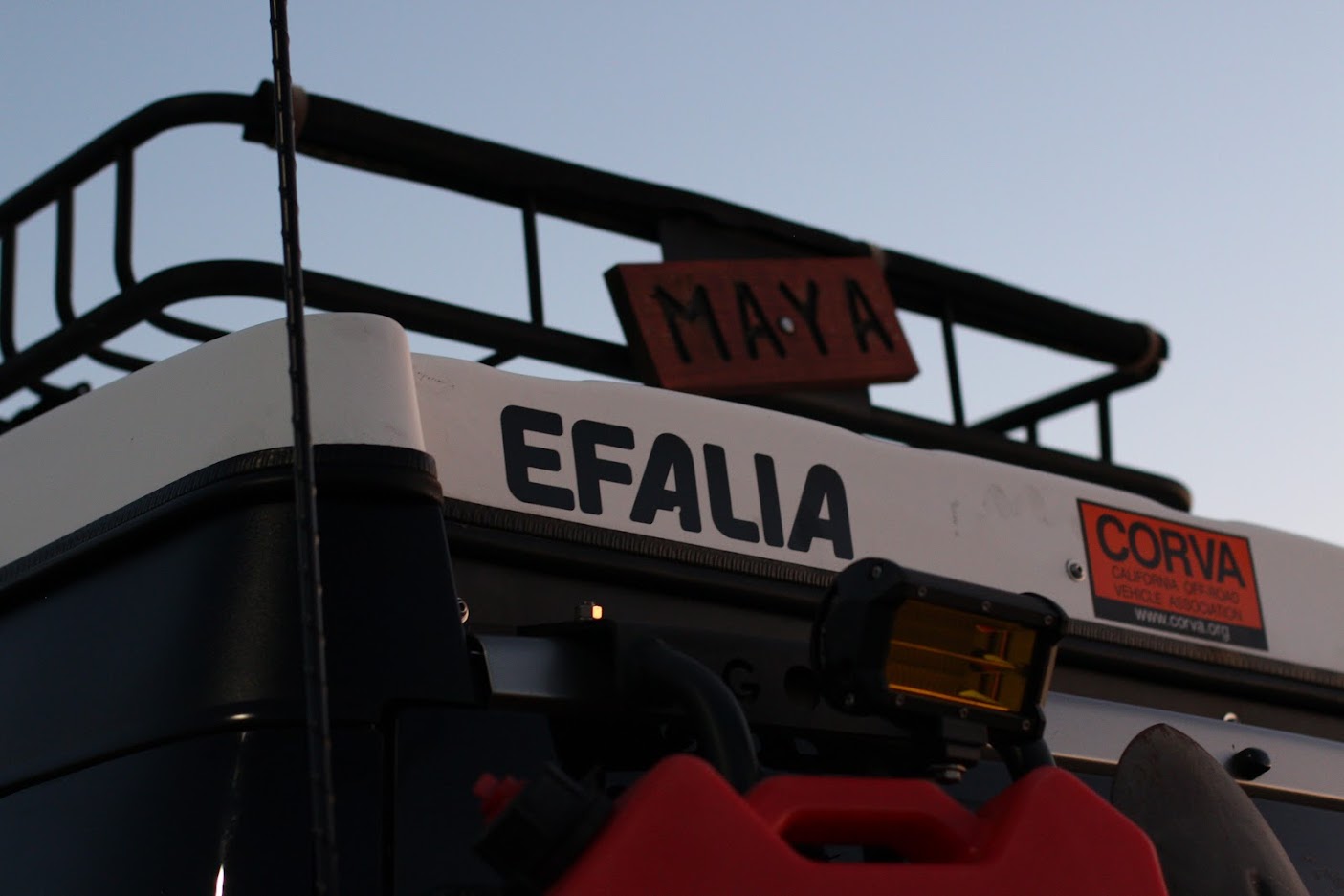 The birth of the eCamper

Fred: During that time we learned about Ursa Minor which was a company that builds pop-tops for Honda Element, the Jeep Wranglers, and now for a ford van. We started researching, I called the owner and he answered all my questions. We thought about that for about a year until we finally committed to that decision of installing the pop top. This was the first mod on our Honda Element and from there, it grew on its own, very naturally 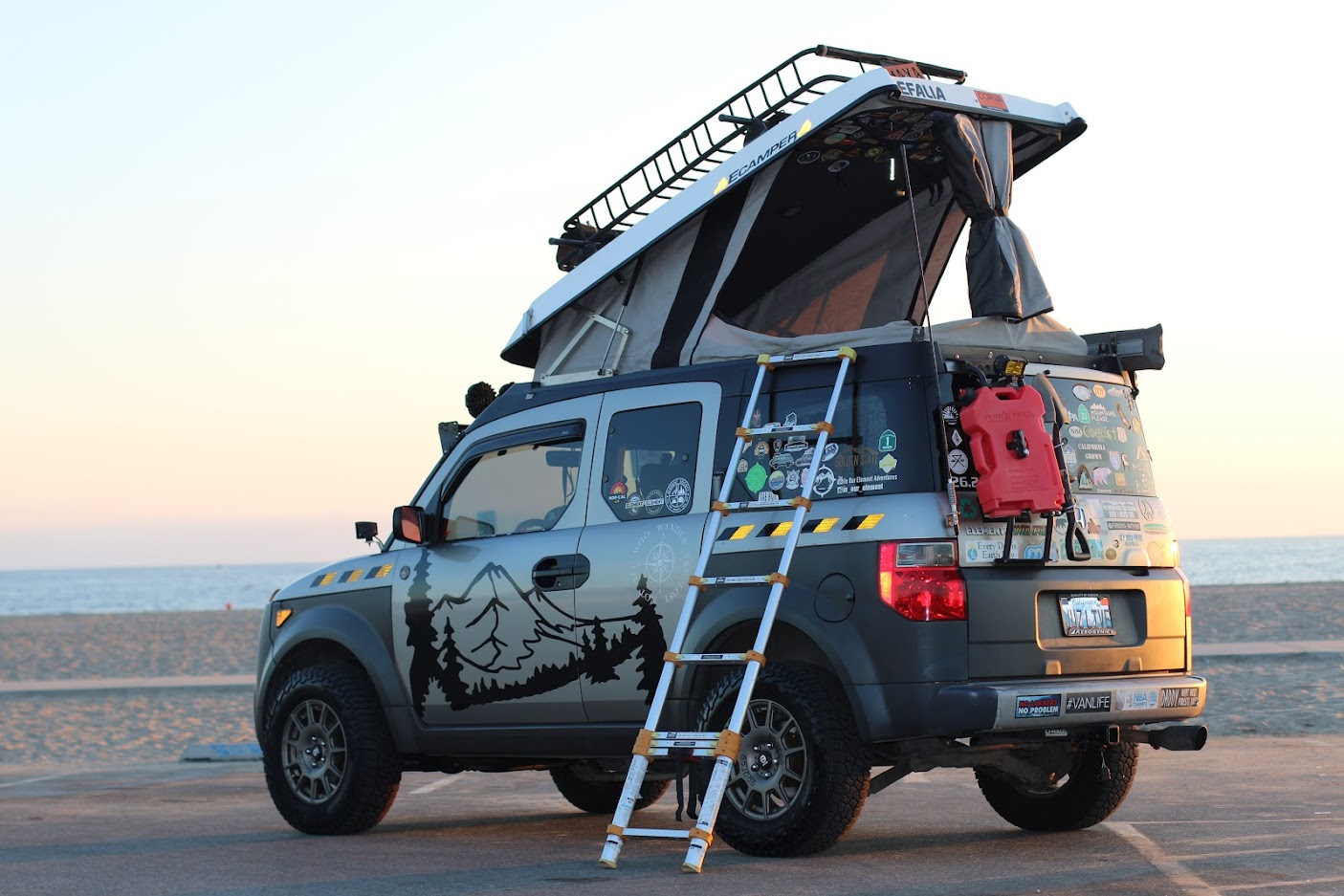 The Ursa Minor eCamper is beautiful! 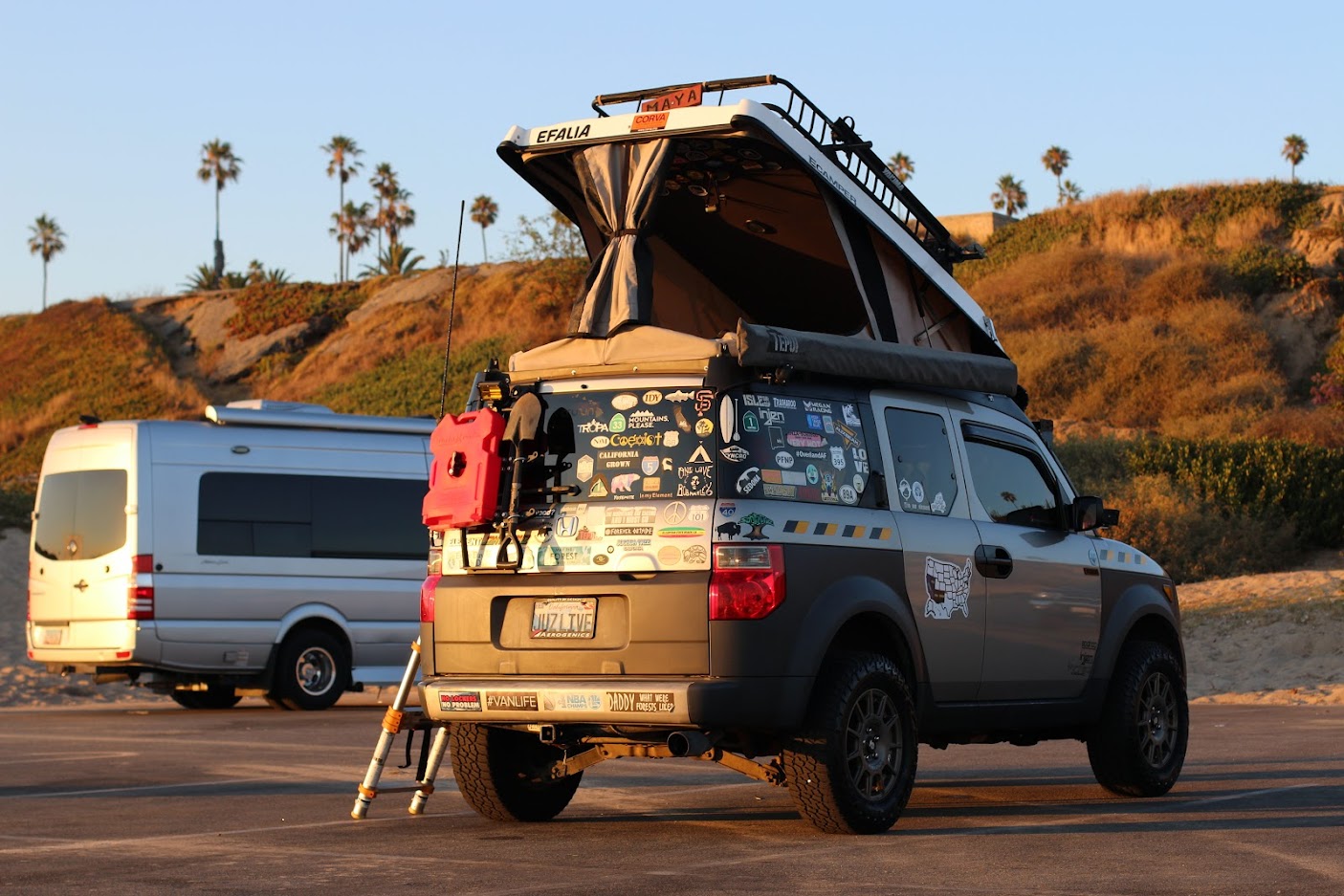 Aerogenics 1" front and 2" rear lift kit helps with the extra weight of the eCamper and spare tire carrier that Fred often carries. Fred also has the Aerogenics Level 2 engine/subframe drop kit to prevent axle vibrations. His rear camber arm is from Megan Racing.

Fred: Obviously the eCamper! It opened up a lot of things for us. We wouldn’t be able to travel without it. It just added a little extra excitement during our road trips; meeting a lot of folks along the way. Not a lot of folks had seen an Element with a pop-top during that time and it is still rare these days. Being able to meet a whole bunch of folks’ families during a road trip was so special. I have to say that the eCamper is my favorite mod. 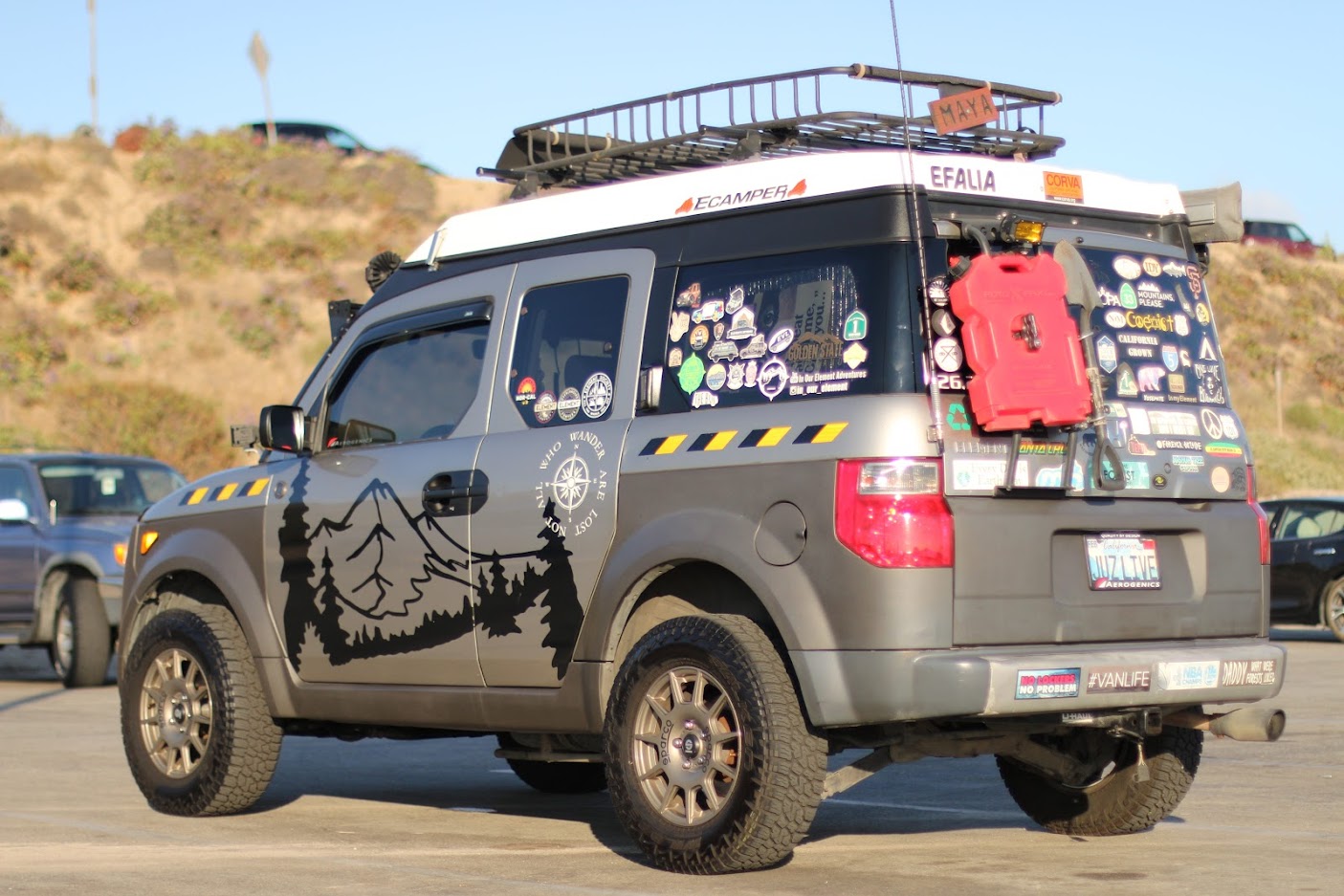 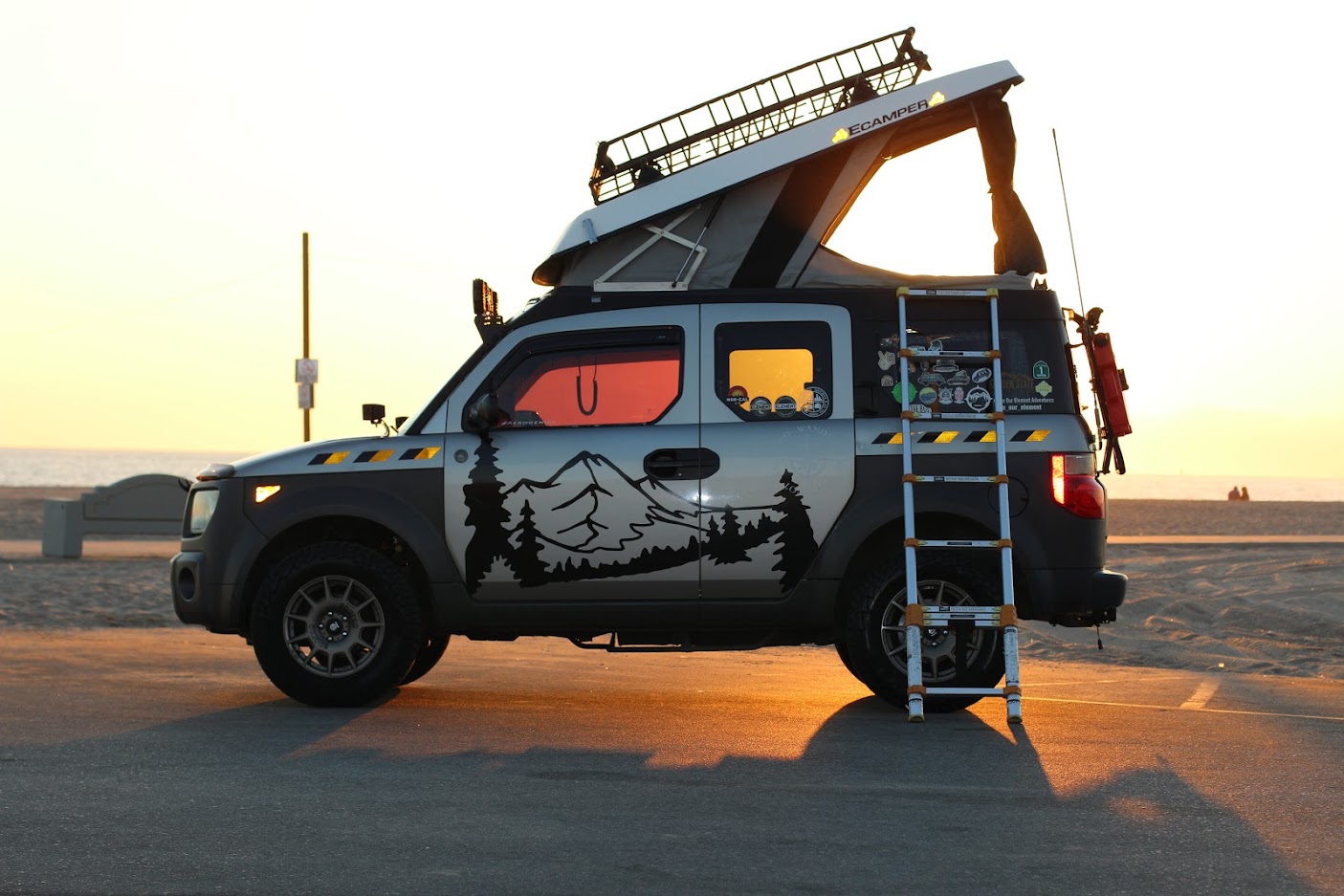 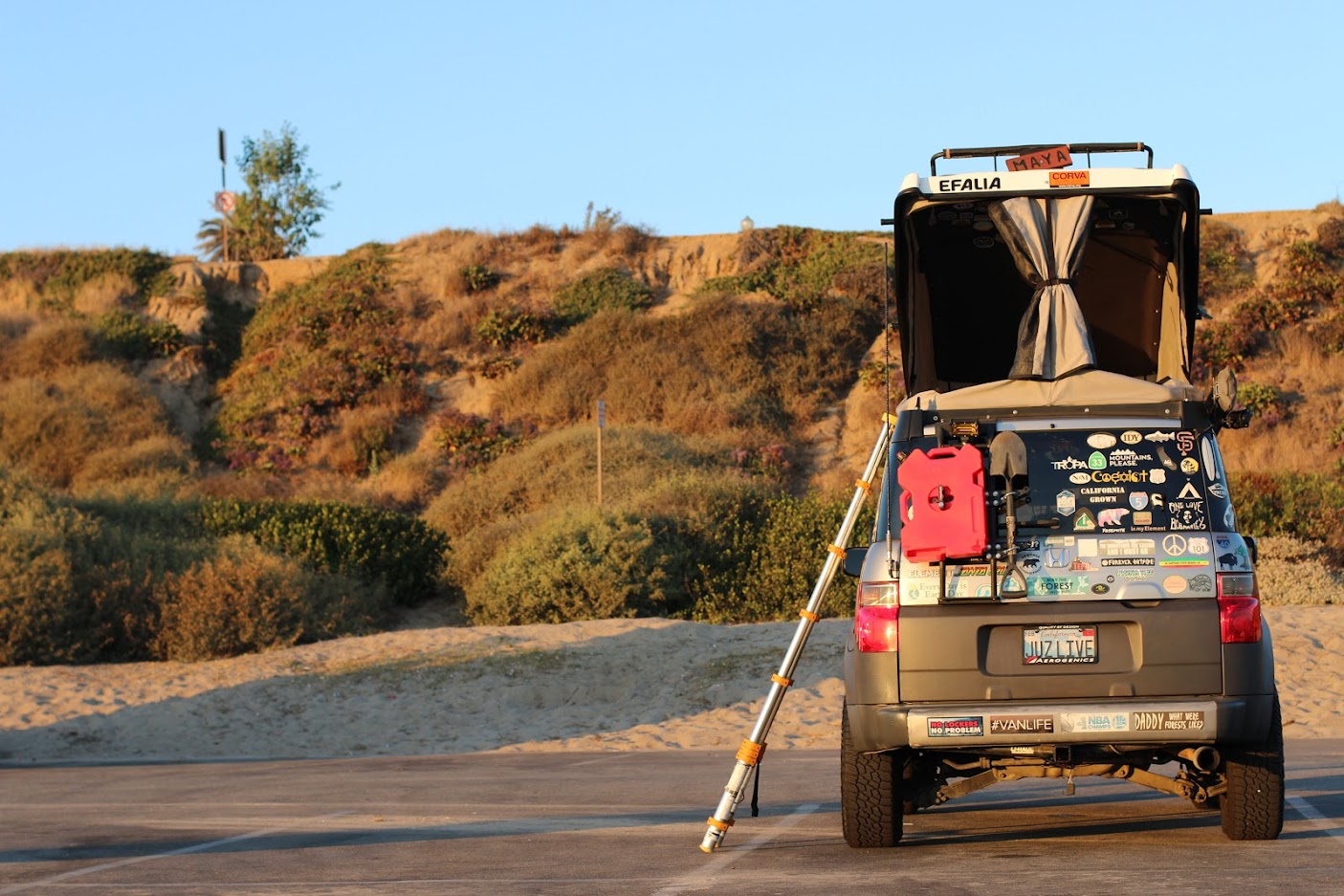 Fred: It's hard to say right now. When I look at my Element and I look at what I don't like about it honestly it's my cheap eBay roof basket. It's fully functional, I took it from Los Angeles to New Mexico and it's carried all of our camping gear. It just looks… cheap. 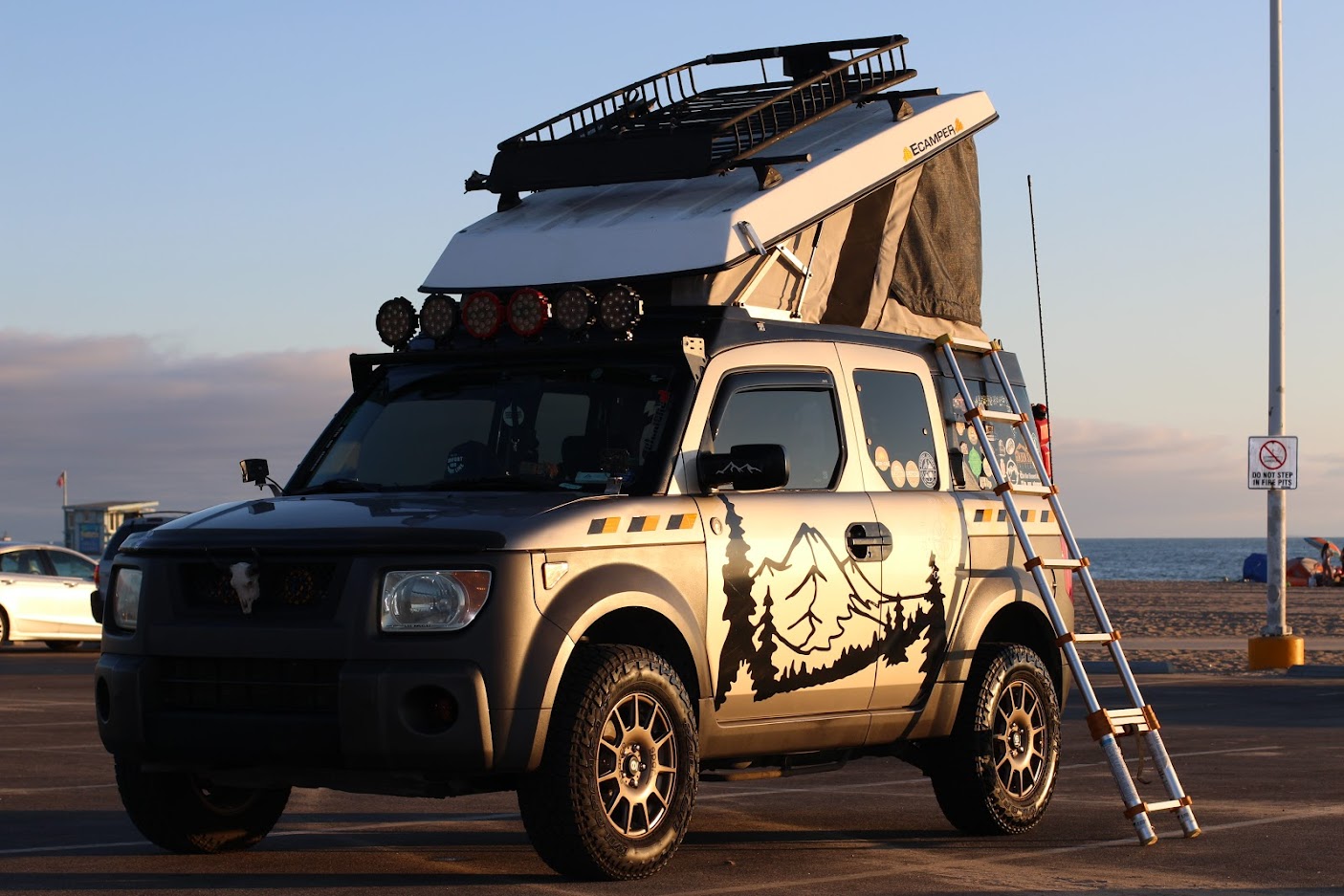 Shhhhh, you shouldn't have told us that it's from eBay!

JR: Mod you regret the most

Fred: There isn't a  mod that I regret the most. There is a mod that I'm still learning which is my lift. That has been a journey that I have taken with an open mind and I think I've pretty much got it dialed in, obviously thanks to Aerogenics and the team for helping me. That is a mod that I enjoyed learning because I do get messages from a lot of Element owners who have questions regarding the lift. I feel like at this point I'm pretty knowledgeable with what needs to happen and what to avoid when it comes to lifting the element.

Check out all these cool mods that Fred DOESN'T regret! 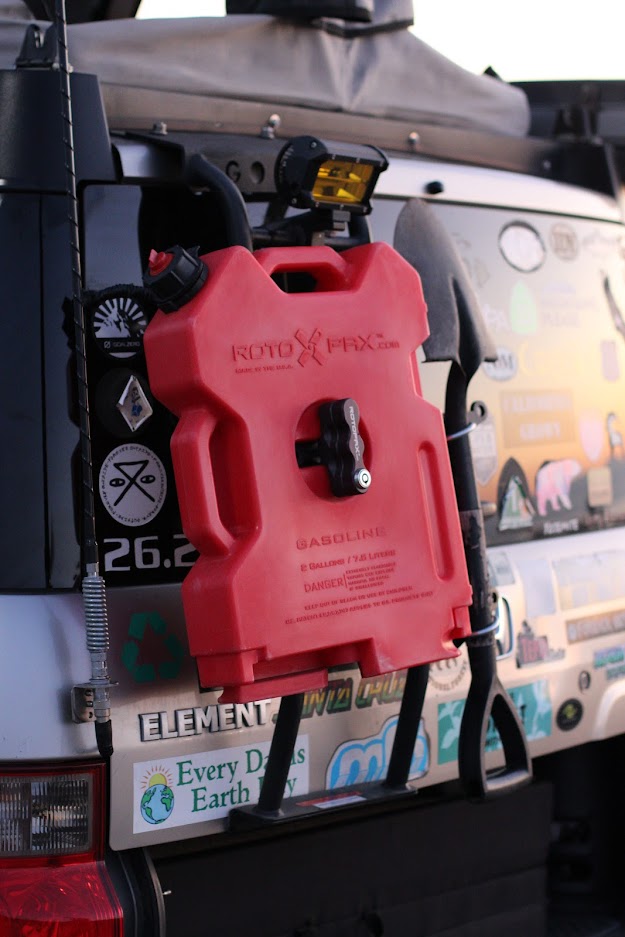 I spy a Gobi ladder (Element edition) behind the 2 Gallon RotoPax! Check out that CB antenna placement and rusty shovel. 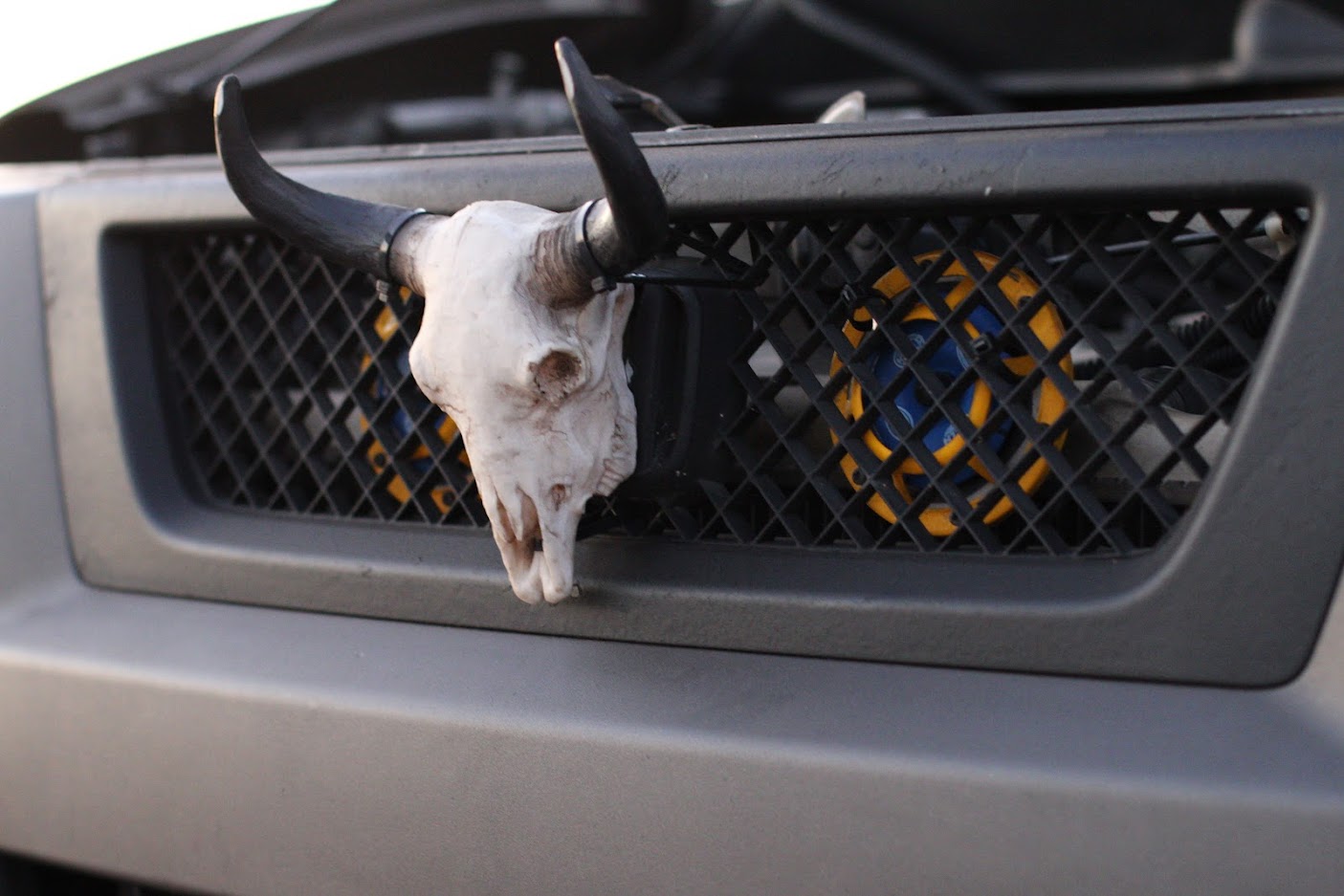 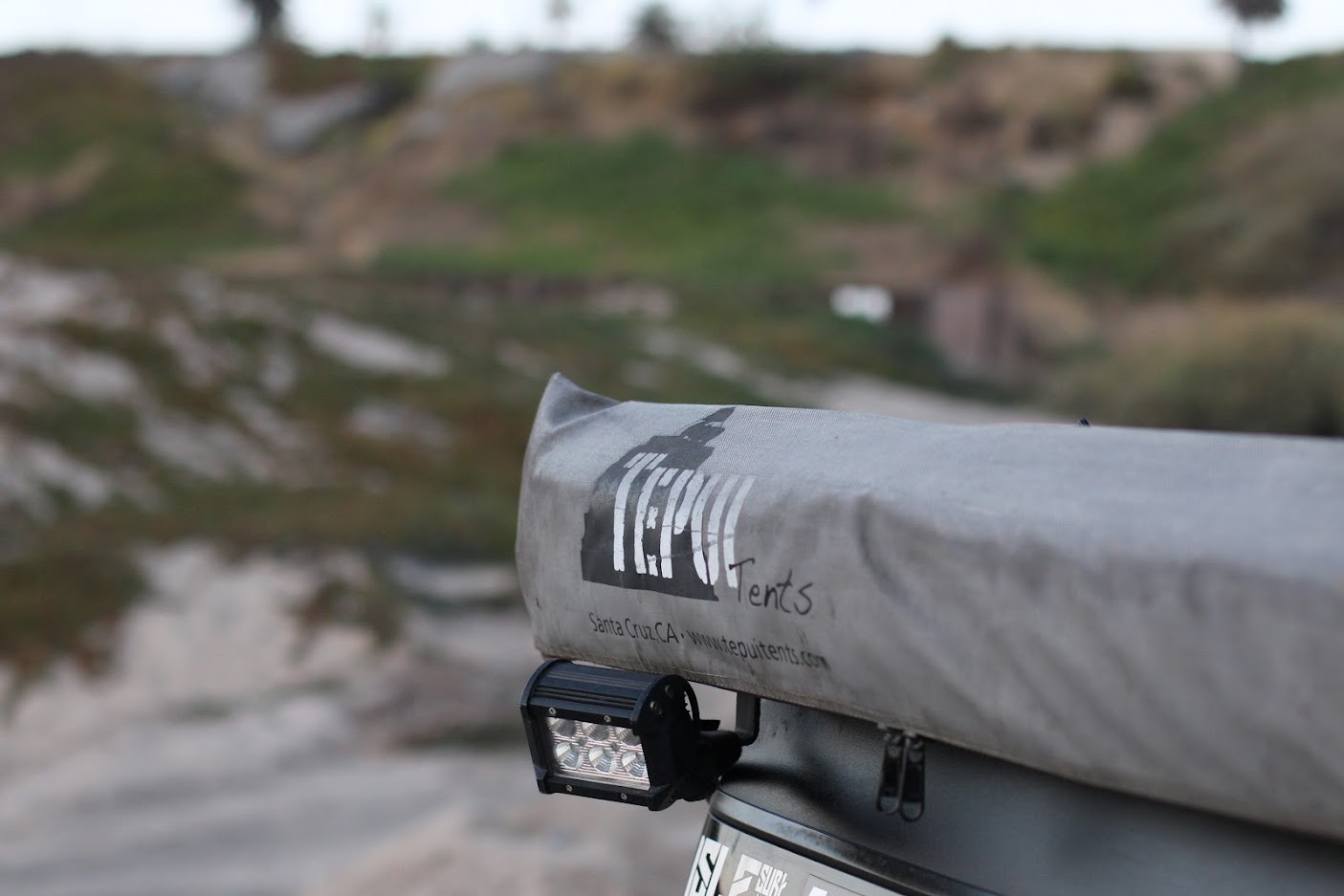 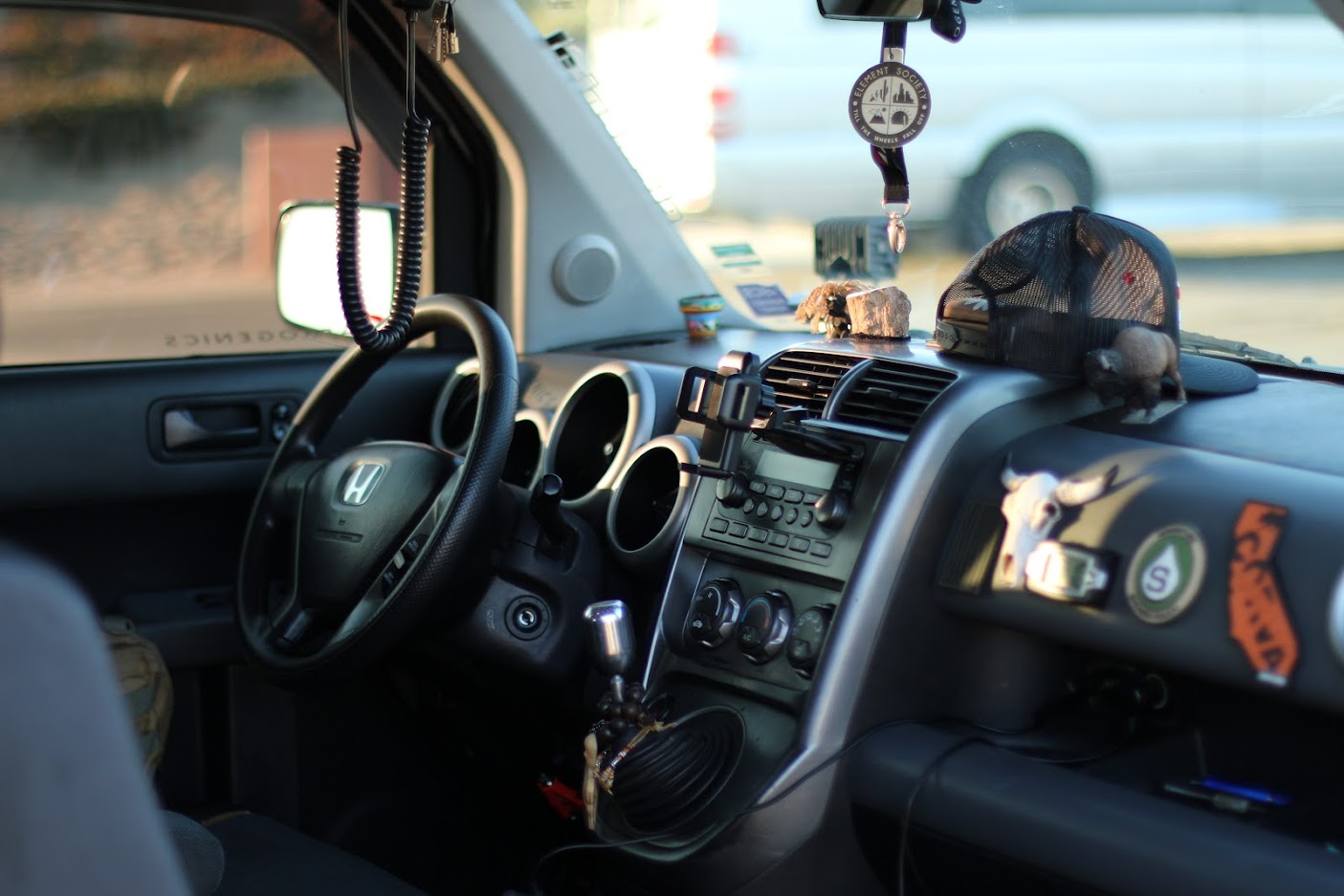 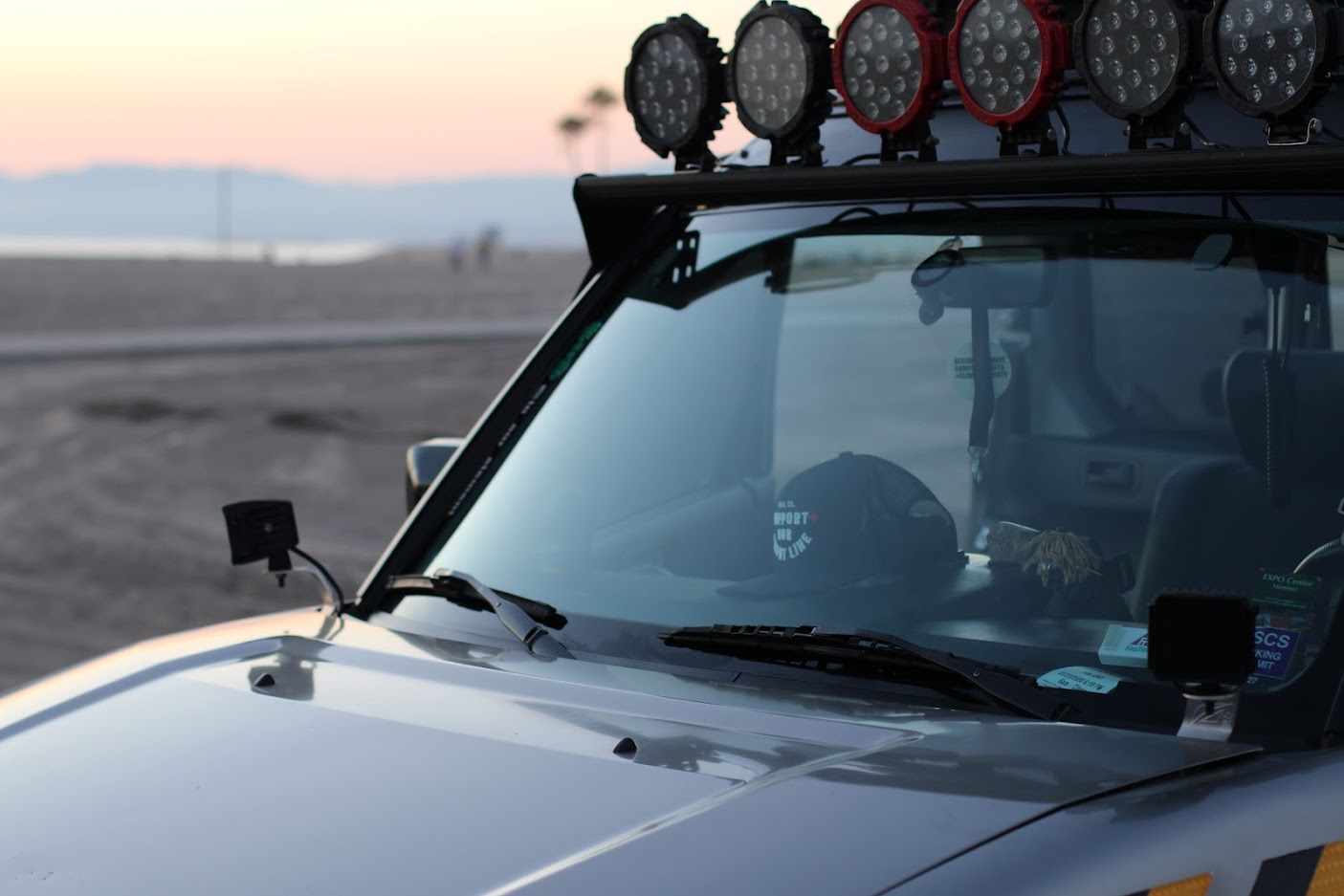 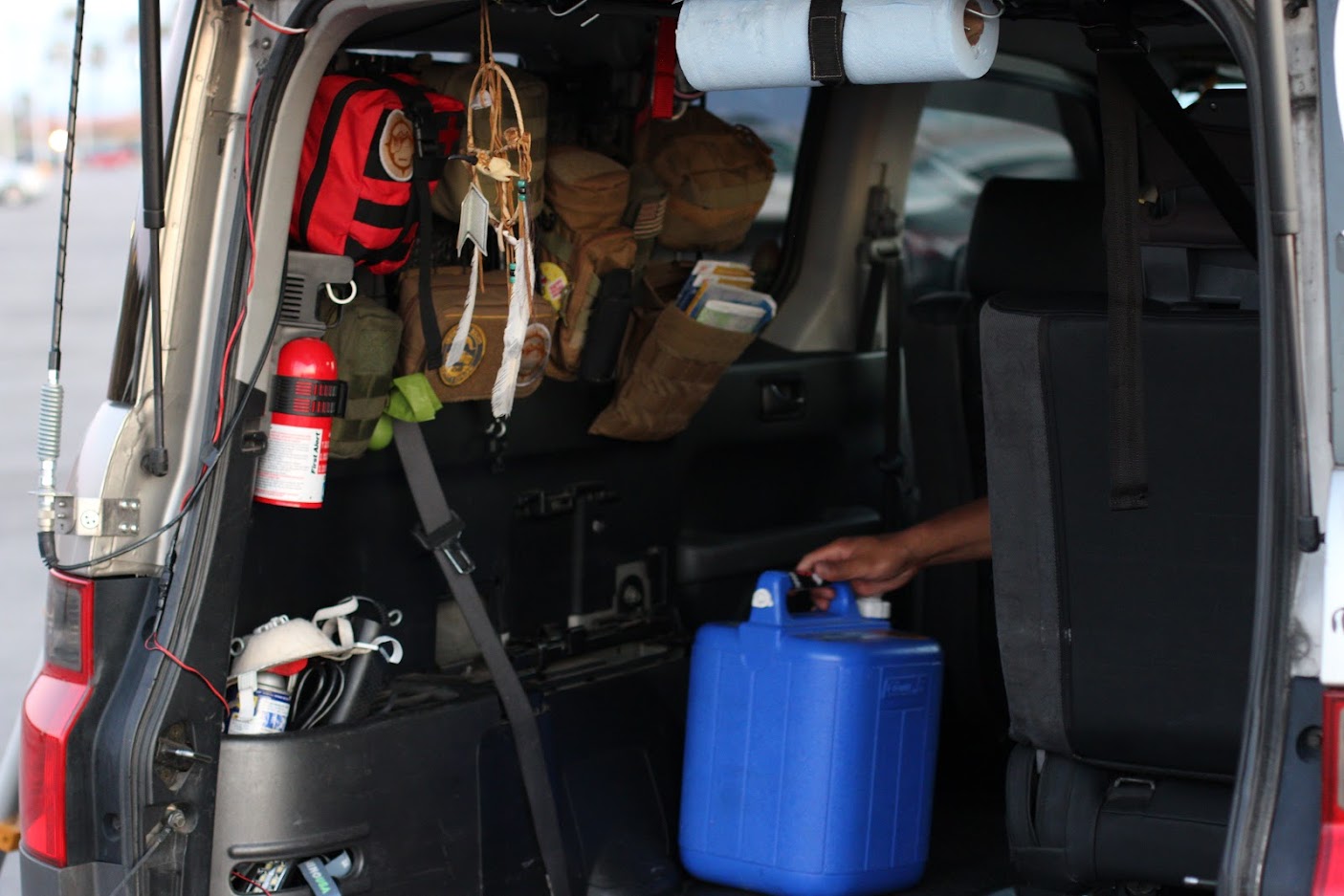 Fred is ready for any situation!

JR: What's your next mod?

Fred: There's a couple that I really do want to happen right away. First one would be skid plates and the second would be a solid front bumper whether that's a tube style or plated. Other than that minor things here and there. 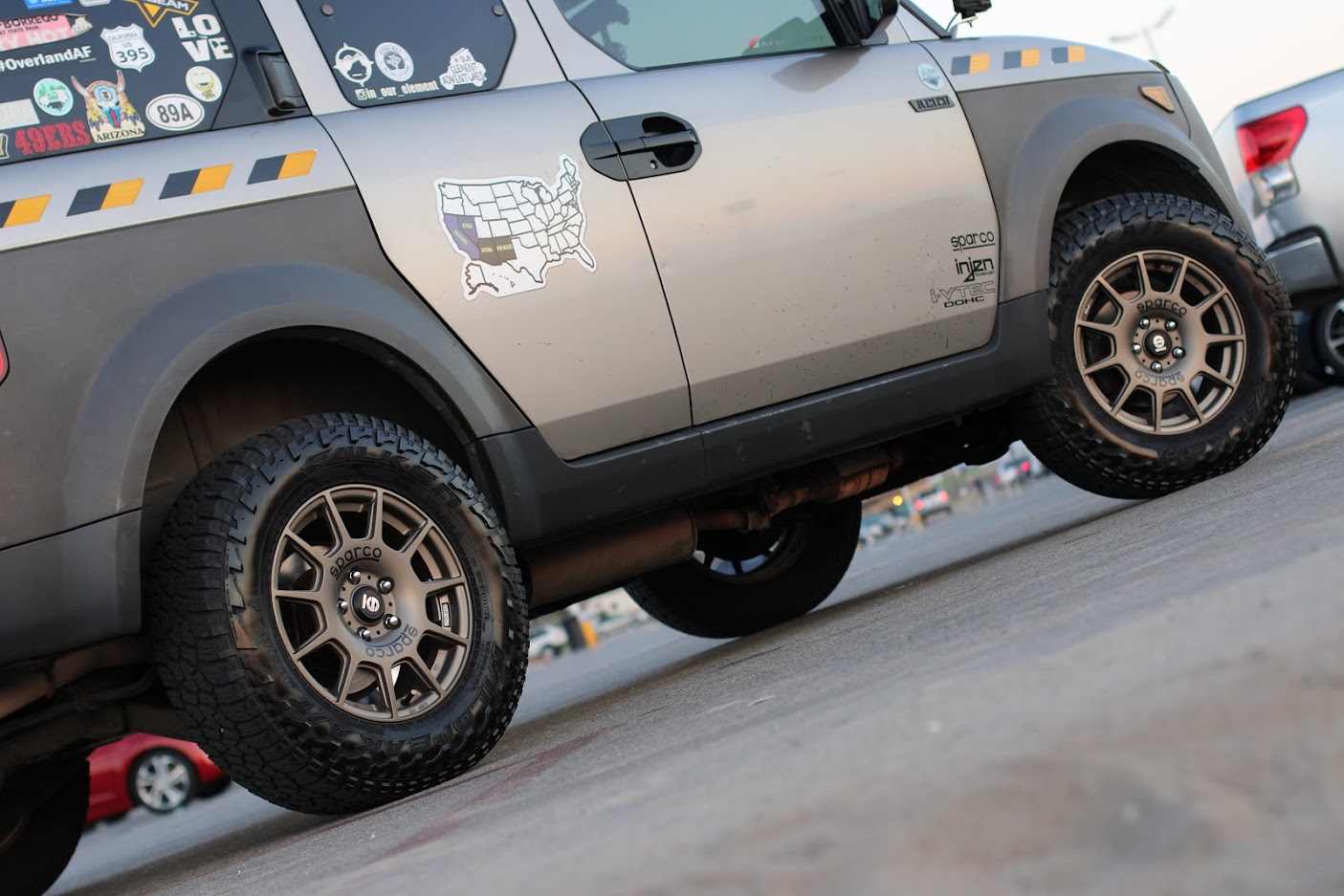 Fred: We had the eCamper installed when my daughter was a newborn so the whole idea of it was to create memories as she grew up; so to narrow it down to one would be difficult. But if I really had to pick, it would be the whole entire Southwest road trip we took for her third birthday. Although there were many positive and negative things that happened; it’s one that I'll never forget. 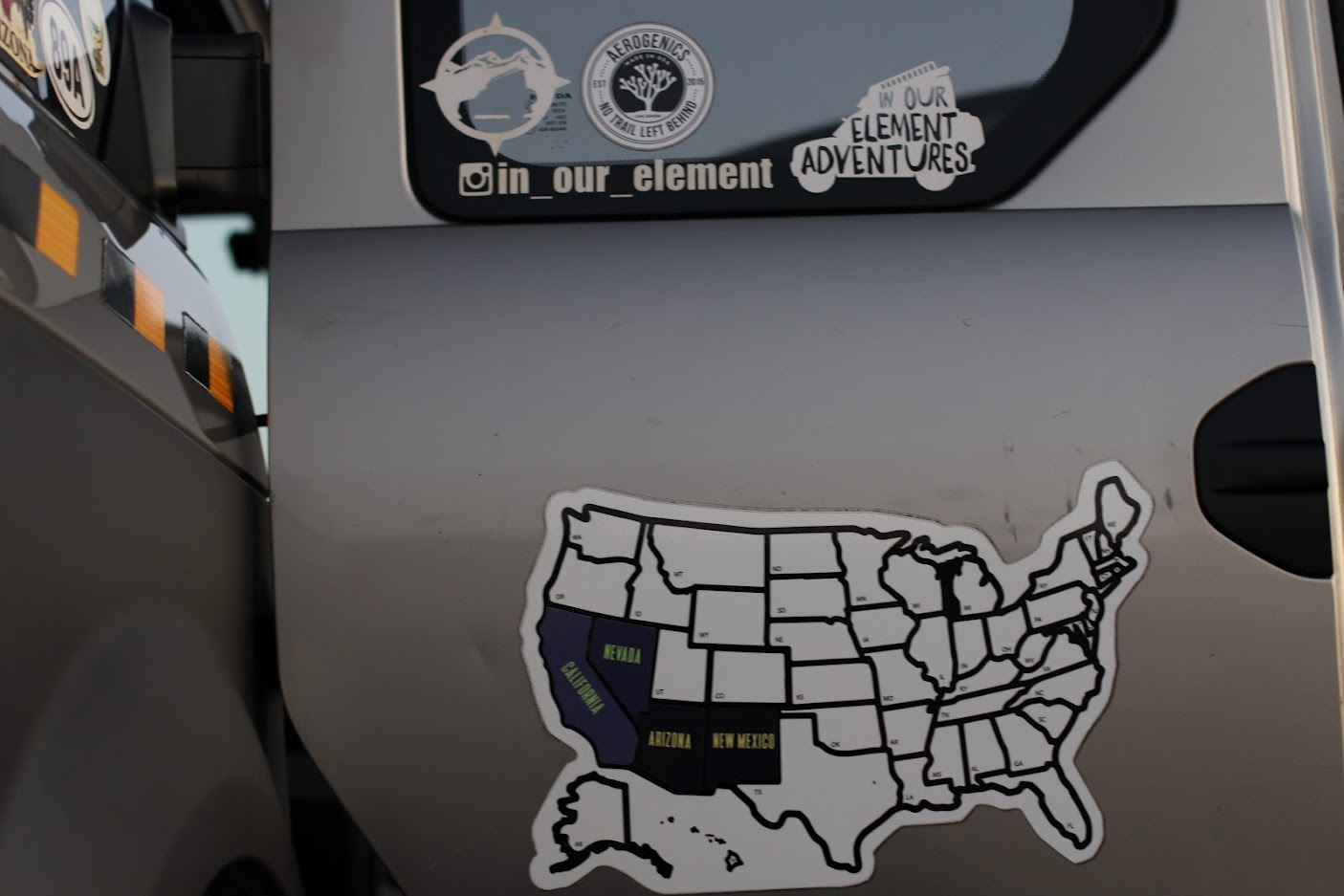 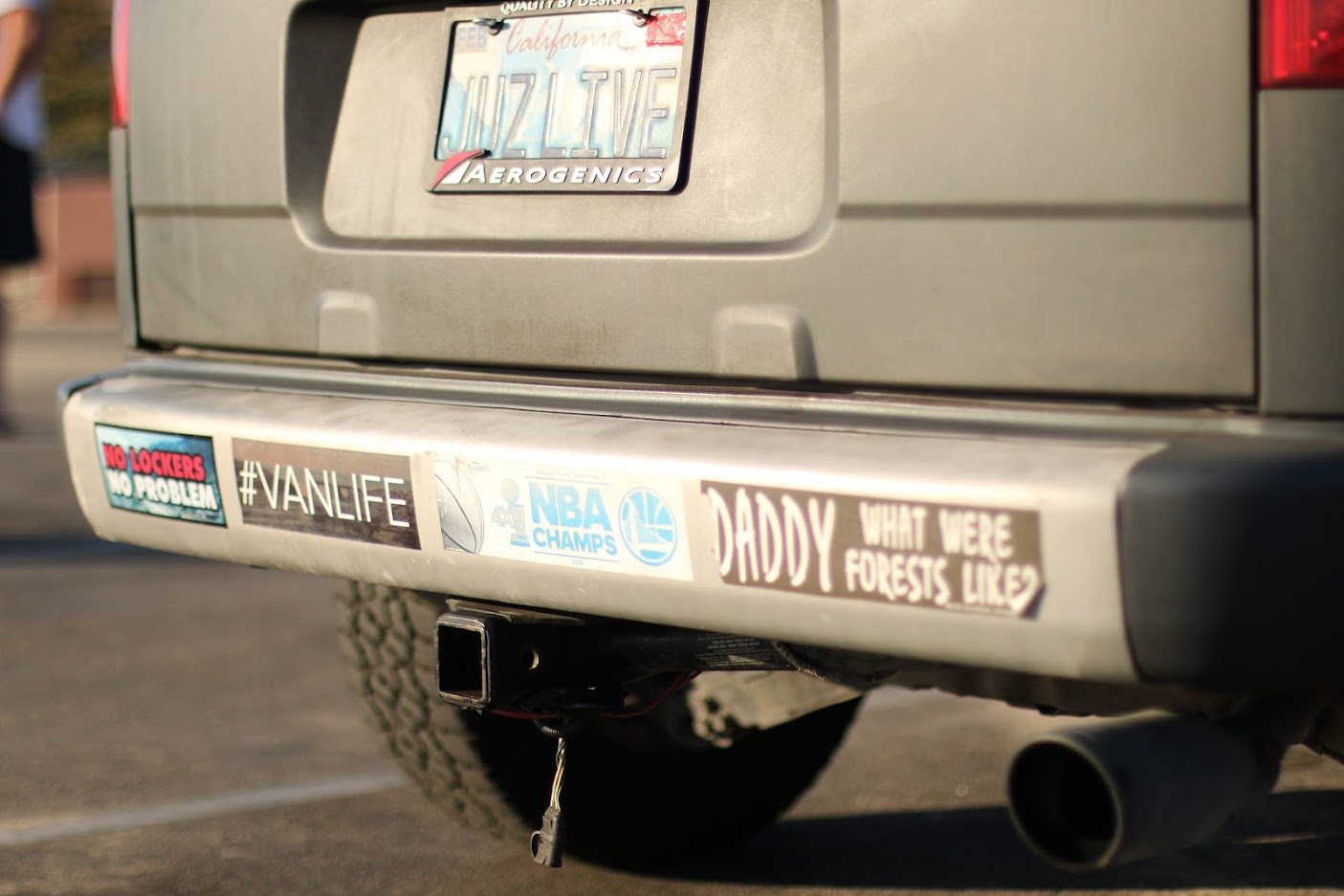 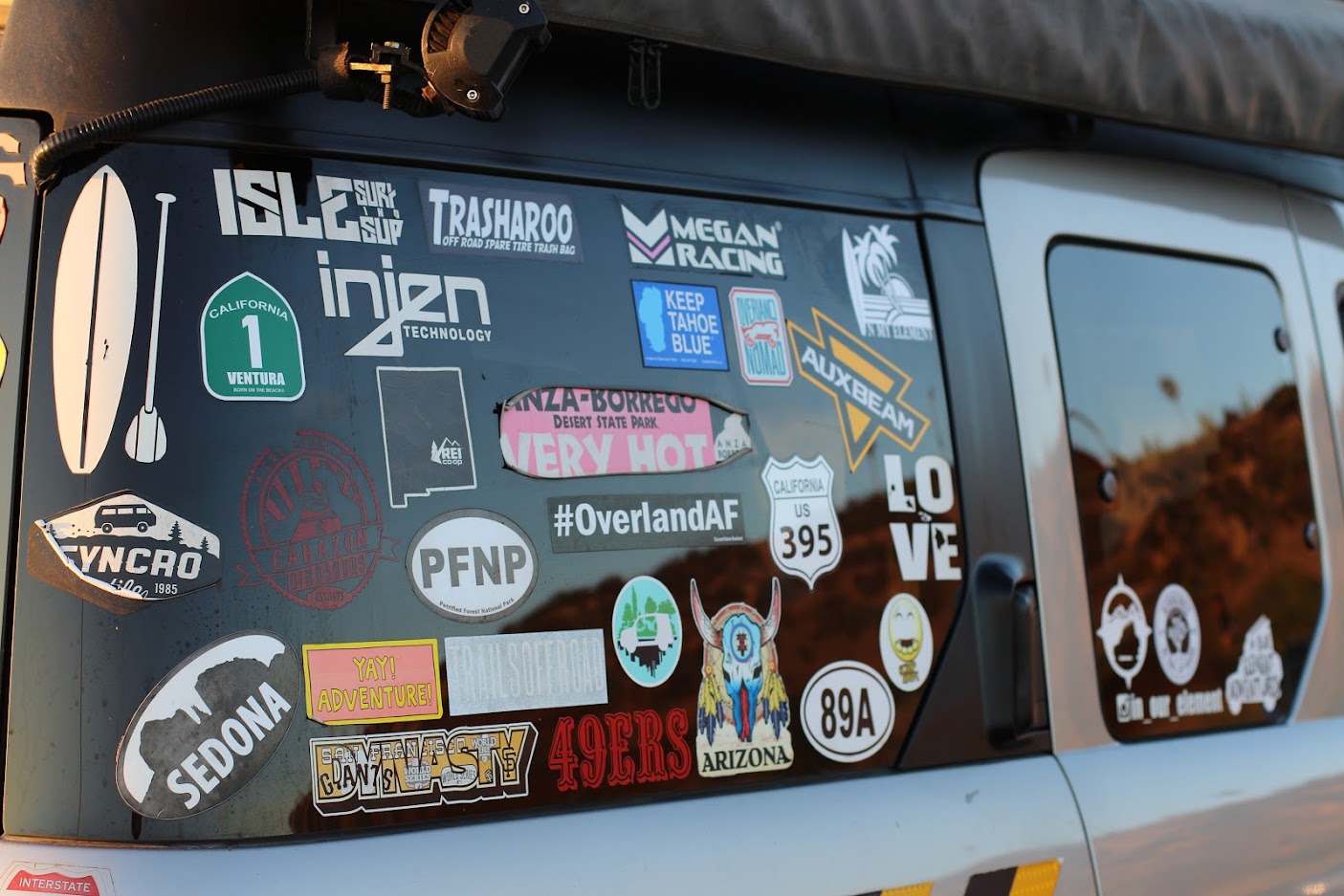 Can't say we've been to all of these places! 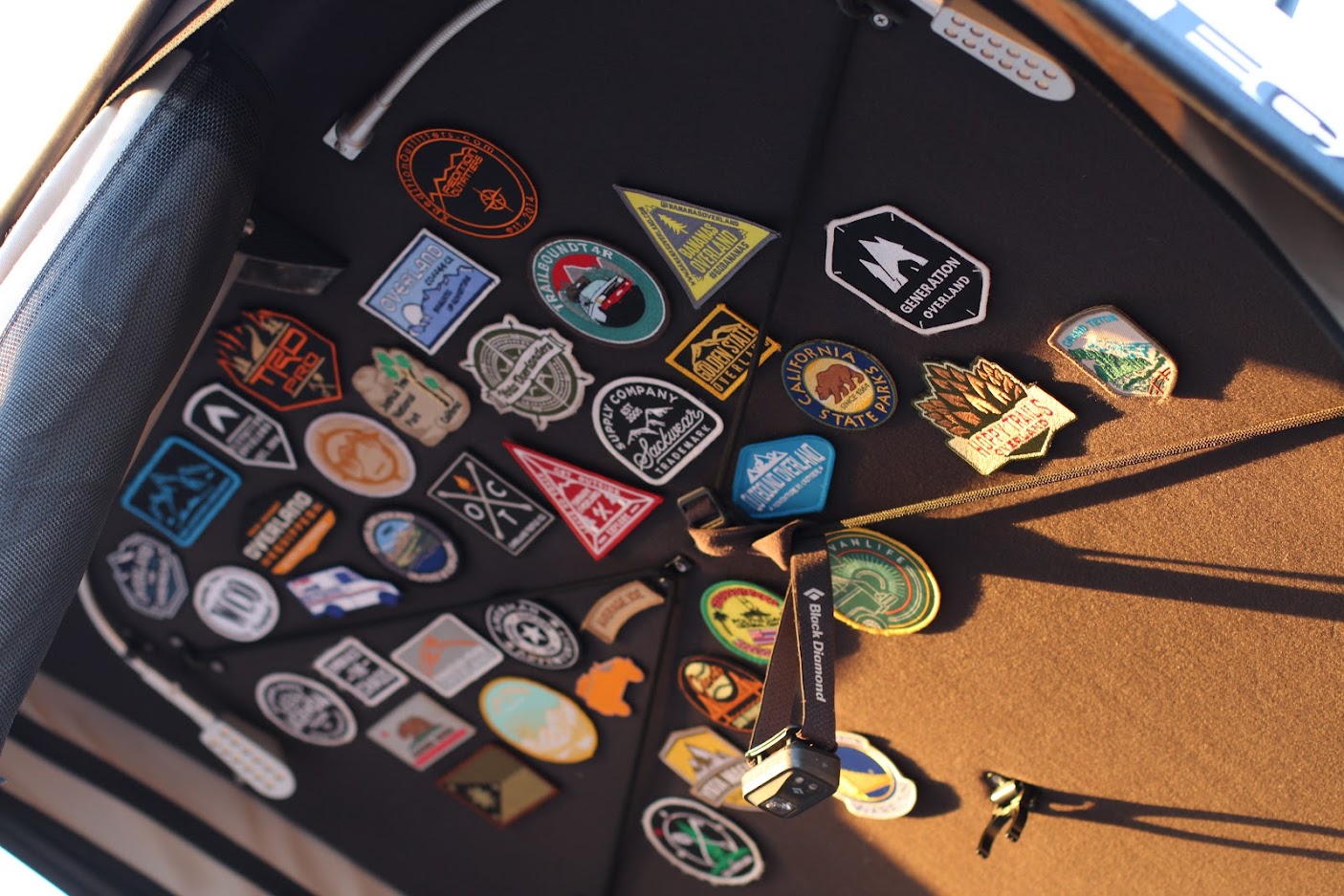 A collection of patches on the inside of the eCamper 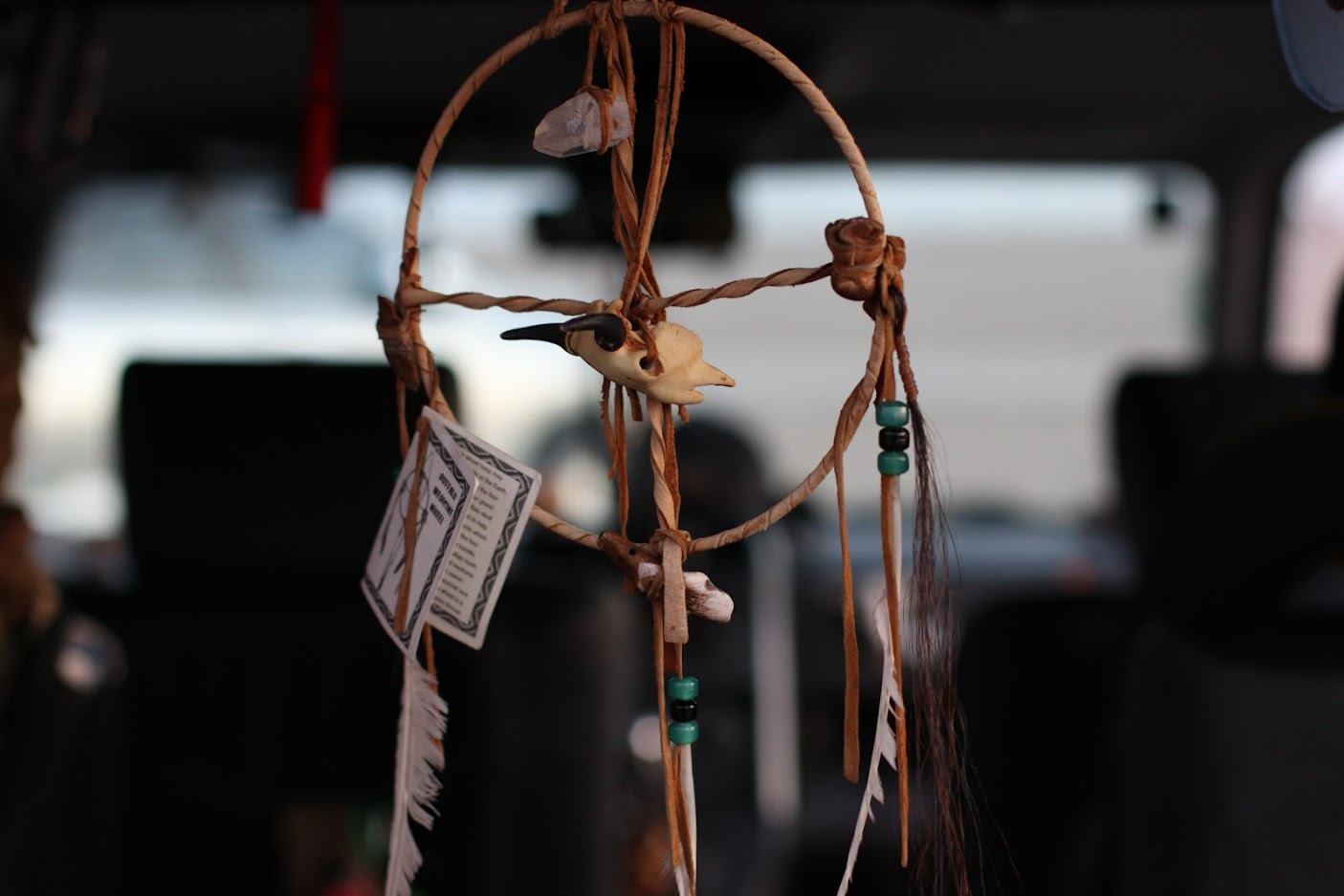 JR: Biggest gripe about the E

Fred: I wouldn't say the Element, but for my Element, it's actually a two-wheel drive. I would love to have four wheel spinning but considering that it is only a two-wheel drive with the Wildpeak tires I can maneuver through some of the challenging trails. 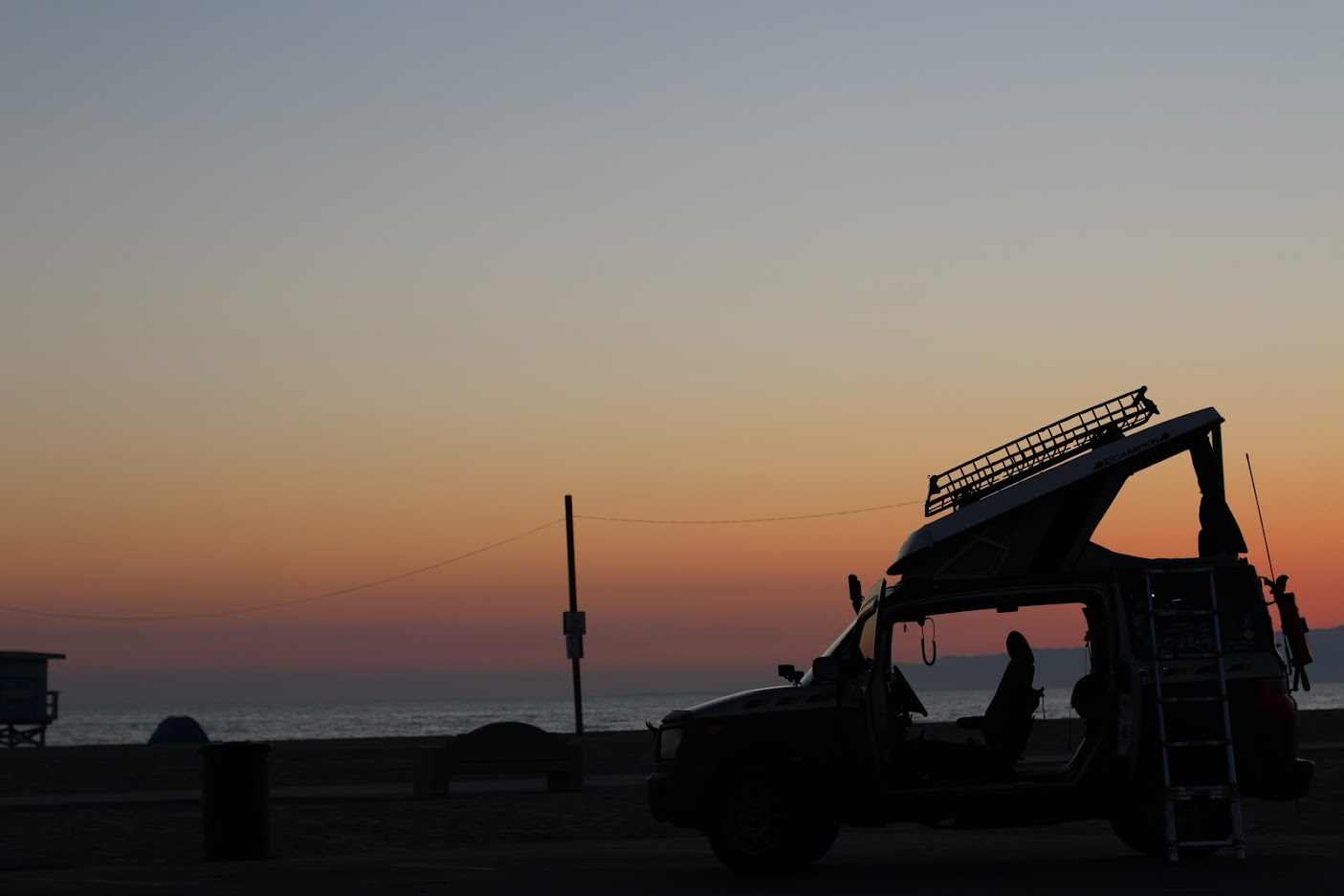 Fred: Roadtrip when we attempted to visit Utah and this is before I met Jason from Aerogenics.

At that time of the Utah trip, I was on a 1.5 inch no brand eBay lift kit. We barely made it to the town at State Line right before Vegas

You can't miss Primm Valley at the Nevada/California border if you're heading to Las Vegas.

Fred: We basically made it to State Line with front end problems but I couldn't pinpoint the issue.  I reached out to the Element community and everyone gave their opinions on what they thought was wrong based on videos and pictures that I could send. We ended up towing it to a local shop and they diagnosed it with a damaged strut mount.

They basically took advantage of the situation; it was Christmas time and they charged me an arm-and-a-leg for a brand new strut. It drove fine for about 10 minutes and as soon as I hit the freeway the problem came back. The shop was already closed since the following day was Christmas and there was no way for me to get a hold of them. No one was open Christmas Day. I was stuck at state line. Basically our last option was to tow it back to Los Angeles. 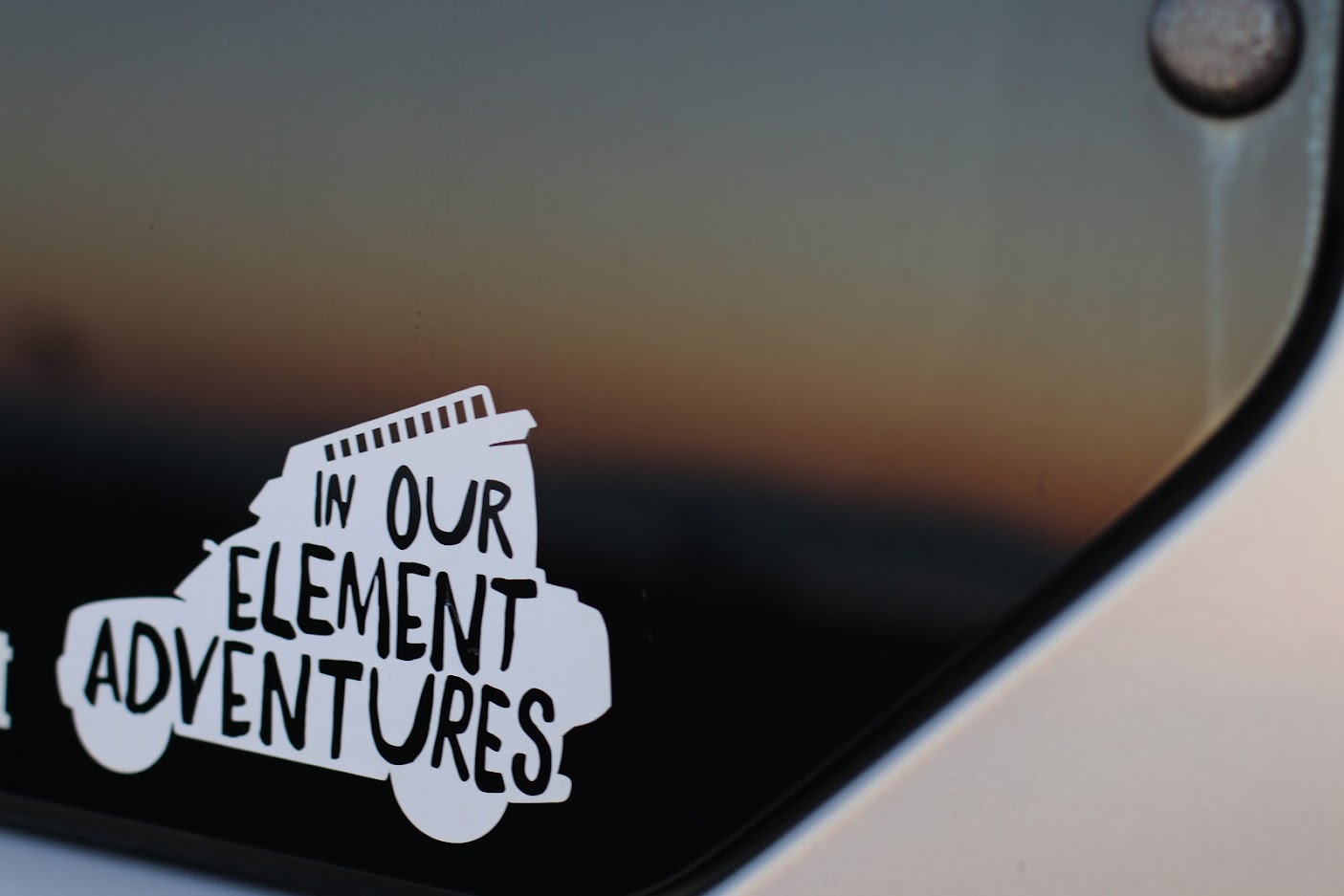 Back home, I took it to my local mechanic, right down the street and he said it was straight up my axles. He fixed it for a hundred bucks! I ended up calling the shop at state line and luckily he gave me my money back.

That trip was when I first met you, Jason, you hit me up on Instagram and offered to help replace my lift and shortly after that, offered me a sponsorship with Aerogenics. What a bittersweet moment. 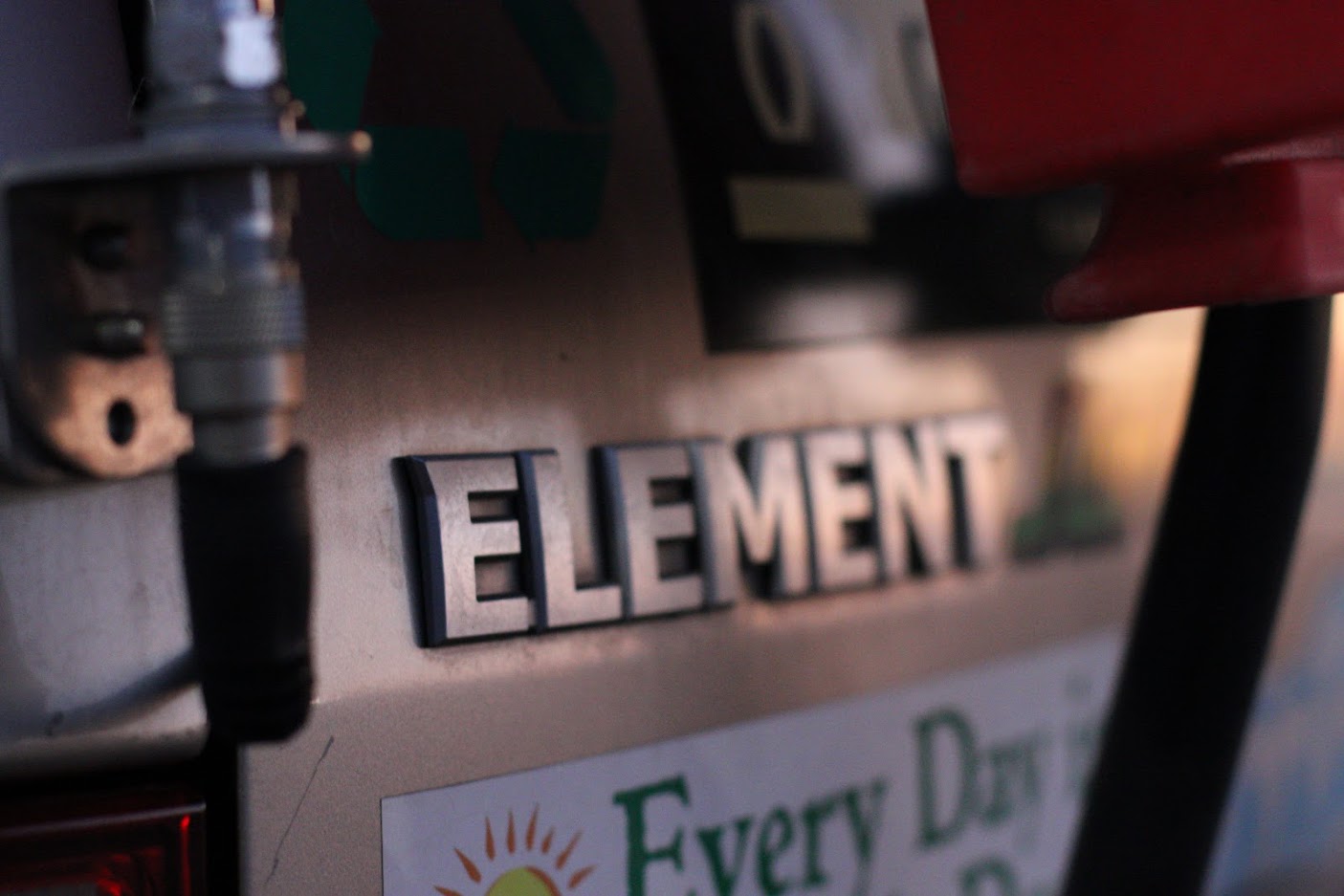 Photos by JR
Words by Jason

Support Fred and his eCamper!